LED Light Therapy: How Does It Work and What Does It Help With?

LED skin treatments are becoming more and more popular in spas and skin clinics, even at home, but what do you know about how they work and what they are most effective for? In simple terms, an LED is a light source that emits (gives out) light. LED light therapy uses light sources to direct light of different wavelengths onto the skin from a few inches away, using single light units or formations of panels. This light has a beneficial effect on the skin and can help improve some conditions. 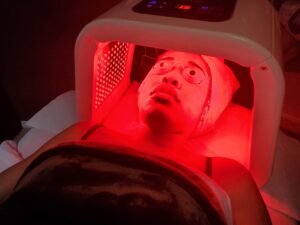 It’s also an effective anti-aging treatment. LED light therapy was originally developed to fast-track wound healing and scars following surgery, but its effects on healthy skin were soon noticed and a new beauty treatment was born. These days, LED facials are evolving all the time along with the technology behind them, and you’ll see different types of LED facial on most esthetician’s treatment lists. Some of these advanced skincare treatments use blue light, and some only use red light. The idea behind LED skin treatments is that using different color light therapy stimulates different reactions in your skin and penetrates to different depths in your epidermis.

So, for example, blue light is often recommended for acne treatment, as it helps kill the bacteria that causes it, while red light is known to be effective for healing and boosting collagen production, so is the top choice for anti-aging treatments. Do LED Light Facials Really Work? It sounds simple, but can a burst of targeted light therapy really make that much difference to your skin? Well, the experts seem to think so. Although the treatments only last a few minutes, there’s evidence to show that they really are effective. There have been studies looking at how well LED light therapies work for both acne and anti-aging and the great news is that both showed significant improvement.

A study published in 2016 stated that: ‘low level light therapy (LLLT) with light-emitting diodes (LEDs) is emerging from the mists of black magic as a solid medico-scientific modality, with a substantial build-up of corroborative bodies of evidence for its efficacy and elucidation of the modes of action. Reports are appearing from many different specialties; however, of particular interest to plastic surgeons treating the aging face is the proven action of LED-LLLT on skin cells in both the epidermis and dermis and enhanced blood flow. Thus, LED-LLLT is a safe and effective stand-alone therapy for patients who are prepared to wait until the final effect is perceived.’ How Does LED Light Therapy Actually Work?

The cells in your skin convert the energy produced by red LED light into a substance called ATP (adenosine triphosphate) – the fuel your cells need to do their job. Cells in the dermis layer of your skin then use ATP to produce more collagen and elastin, which plumps up the skin, and reduces the appearance of fine lines and wrinkles. Blue LED light works slightly differently – it kills Propionibacterium acnes, the bacteria that lives below the surface of the skin and causes acne breakouts.

How Many Sessions Will I Need? It’s likely that you’ll need at least four treatments before you see results, but the benefits are cumulative, and once you’re happy with the effects, you can scale your treatments right down to maintain them. Ask your esthetician for more information if you want to see the effects for yourself.